Ed Falco and the Quest of a Lifetime

As we did last year, The Story Prize is once again inviting the authors of the story collections we receive to contribute to this blog.

In the first in a series of posts on 2011 short story collections entered for The Story Prize, Ed Falco, author of Burning Man (Southern Methodist University Press), elaborates on his reasons for writing short stories. 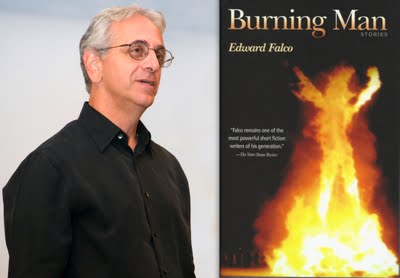 Question
Why do I write short stories when as a rule there is no money to be made or fame to be gained as a short story writer in America?

Answer
“The Country Husband,” “The Death of Ivan Ilych,” “Cutting Edge,” “The Minister’s Black Veil,” “Guests of The Nation,” “A Hunger Artist,” “The Babysitter,” “Chopin in Winter,” “The Magic Barrel,” “Some Other, Better Otto,” “Araby,” “Sugar Among the Chickens,” “A Good Man Is Hard To Find,” “The Open Boat,” “Cathedral,” “The Management of Grief,” “I Want to Live!,” “The Lady with the Pet Dog,” “Tell Me a Riddle,” “Bullet in the Brain,” “Bartelby, the Scrivener,” and “What You Pawn I Will Redeem.”

Elaboration
If you’re a short story writer or reader, you know all or most of the stories above, by, in order, Cheever, Tolstoy, Purdy, Hawthorne, Frank O’Connor, Kafka, Coover, Malamud, Eisenberg, Joyce, Lewis Nordan, Flannery O’Connor, Crane, Carver, Dybek, Mukherjee, Thom Jones, Chekhov, Tillie Olsen, Tobias Wolff, Melville, and Sherman Alexie.  These are all short stories that have become a part of my life, that is, they have dramatically influenced both the way I see the world and the way I live in the world. I don’t think it’s too much to say that a few of these stories changed my life. I read “The Death of Ivan Illych” when I was still in my teens, and from the moment I put the story down I started looking at the world through different eyes. The harrowing death scene that ends the story, the innocuous “bump” that begins Ivan’s decline, the futility and foolishness of living one’s life “decorously”––all of these elements of the story worked their way into my consciousness immediately through Tolstoy’s skill as a storyteller and thereafter took up residence in my internal life, guiding my thinking and my behavior. To larger or lesser degrees, the same is true for all the stories I’ve listed. They have influenced my life.  In some cases they have changed my life. And they’ve done so in an instant, in the brief time it took to move from the first word to the last.

Not many short stories will have this kind of impact on me. I read lots of stories that give me pleasure, that are terrific stories, but nonetheless don’t have such a powerful effect. Some of my favorite short story writers are not represented on that list. I couldn’t imagine it any differently since surely for a story to have this kind of influence a whole set of circumstances has to converge, many of which have as much to do with the reader as with the story itself.  Still, I always start reading a story with the hope that it will hold this kind of power.

I write short stories because the act of writing one engages me like almost nothing else. Once I have a story going, I spend my days thinking through its possibilities. I go to bed thinking about it, and I wake up in the morning excited about getting to work. I’ve been writing for a long time now and the excitement has never gone away. There’s a rush I feel at the completion of a short story that “works,” that feels right, that is unlike any other writing experience. In a good short story, all the elements come together, they click into place with a sense of finality. In the process of writing a story, I never know whether or not I’ll get there.  Sometimes everything is moving along just fine, but the ending won’t click. Sometimes I’ll spend days on the opening paragraphs before I realize I don’t have a story at all. Sometimes I’ve got a good beginning, but no place to go. Sometimes I have to settle. I have to accept that I’ve written a story that is clearly not one of my best, but for one reason or another––usually because it explores a question that remains important to me––I settle for it.  I say to myself something like, “Okay, it’s not one of your best, but it’s still part of the family.”

And sometimes everything works, everything clicks, and then the aforementioned rush follows.

As for why I get excited about the possibility of writing a good short story, I refer you again to my original answer to the question that opens this post. I get excited because the quest to write a story that’s as good as any of those listed is a challenge that can occupy a lifetime. The hope of doing so is thrilling.
Posted by Larry Dark at 12:59 PM
Email This BlogThis! Share to Twitter Share to Facebook Share to Google Buzz
Labels: 2011 contributors, Ed Falco